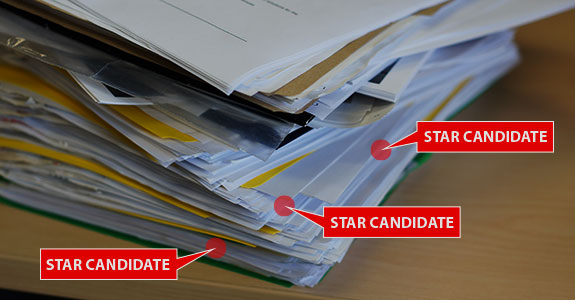 When Steven Wieske joined Converting Technology, Inc. as their Operations Manager he realized that he faced a turnover problem in their manufacturing department. But when he tried to fill the empty roles, he discovered an even more alarming issue. As soon as he started posting the open positions he almost drowned in a tidal wave of applicants—and most of them weren’t really interested in the job, and wouldn’t even show up if hired.

For Steven, the hiring process was incredibly frustrating. He found that, out of two to three hundred applicants for a job, 90 to 95% of the candidates were not even remotely qualified for the positions he needed to fill. They either had no relevant experience or lacked the skills he was looking for.

He’d have to sift through all of those applications to find maybe five or seven candidates that he could interview. Of those candidates, he might get three who even called him back and scheduled interviews.

And, of those three, one or two wouldn’t even show up for the interview.

“It was a big waste of my time,” Steven says. “I would have a couple of interviews and then I would offer a job to somebody. Either they wouldn’t show up on their first day, or they would spend a week here and either quit or I would have to let them go because they were obviously not qualified.”

The junk applicant epidemic was more than just a headache for Wieske, it was hurting the company. As he says, “I manage all day-to-day operations at Converting Technology. This includes HR, but also manufacturing, printing, shipping/receiving, warehousing, engineering and maintenance.”

When the hiring process went wrong it would suck up way too much of his time, sometimes causing problems in other areas of the company. If he had to go through two hundred useless apps, dozens of wasteful phone calls, and ten bad interviews to find someone who didn’t even show up for work, he was wasting time that should be spent on all the other areas he had responsibility for.

Many services, no solution

The junk applicant epidemic quickly reached a crisis point for Steven. Something had to change.

His search for a solution led him to try using a local jobs board and some of the national boards like Craigslist. But none of them worked well enough. In some cases he only got two or three applicants, none of whom were suitable. And in other cases the flood was so great it became too much to handle.

What he needed was some kind of filter—so Steven tried a company that provided in-depth analyses of candidates. But that didn’t solve the problem either. Getting long reports on each candidate didn’t stop him from having to weed through three hundred applicants each time he needed to make a hire. It actually required more effort on his part.

And it didn’t guarantee results. As Steven says, “you can use psychological tests, and they come up with a big, long narrative about the person’s personality, and their tendencies, but it’s still incumbent upon the hiring manager to actually interpret what these results are and what they mean.”

What he needed was a solution that would, in his words, ‘cut-to-the-chase’.

Something had to change

Steven’s problem wasn’t finding applicants. The real problem was finding the person at the end of the process who would be a great addition to the company—the one person who would be right for the role.

So Steven started searching for an assessment tool that would be simple to use and would save him from having to wade through the tsunami of junk applicants. In the back of his mind he was thinking, “There’s got to be somebody who can test these people before I hire them to tell me if they’re going to be a good employee or not.”

When Steven started doing internet searches for an effective solution he came across ClearFit. It looked promising—simple and designed to make the assessments he was looking for.

As a trial, Steven had his employees take the ClearFit survey to see how it worked and how well it predicted success in a role. When those survey results showed that the ClearFit outcome matched what worked in his workplace Steven decided to jump in and start using it.

And things started to change for him right away.

He was still able to cast a wide net because ClearFit automatically posted to many different job boards—plus Steven could link to boards he’d tried in the past, like a local Milwaukee job board. The software would pull every applicant from all those sources into his ClearFit account.

But the key thing was, the ClearFit software would review all those applicants and point him to the candidates he should pay attention to.

He was no longer flooded with useless applications. As he says, “With ClearFit you know the person walking in is going to be able to do the job. I can cut to the chase. I get a crystal clear snapshot of ‘yes, this person is qualified; no, this person is not qualified.’ It’s very quick and simple and cost-effective for us.”

As Steven says, “ClearFit eliminates the trolls, so to speak.” He found that using ClearFit filtered out the people that were not serious about applying for a job; the people that only click on “Apply Now” to satisfy some requirement for unemployment benefits.

And he found that the candidates ClearFit recommended as being a fit for the position could generally come in and perform in the job. He says, “Using ClearFit we probably have a 90 or 95% success rate. I’ve had very few, maybe one or two candidates over the last couple of years, that didn’t work out.”

Using ClearFit Steven has been able to stem the tide of junk applicants. He spends less time on the hiring process, and gets far better hiring results. He no longer has to hire three or four times to find the right person for each role.

And that means that he has more time to focus on employee development and the other operational areas of responsibility that demand his attention. Morale is good, relationships with clients are great and the company is growing.

What’s next for Steven and Converting Technology?

Right now he’s looking for inside salespeople to keep the operations pumping…and of course, using ClearFit.

As he says, “Hiring managers and company executives are always trying to find good people. Whenever I get into a conversation about that I tell them about the ease of use of ClearFit, how much time it saves because you’re not reading through resumes and every single application that’s out there. For the hourly jobs, mid-level management, sales jobs, the blue collar jobs, ClearFit is the only one out there as far as I’m concerned.”