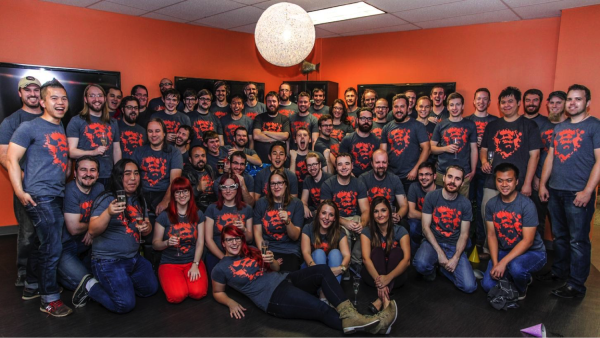 In the winter of 2014, serial entrepreneur Albert Lai sat alone waiting for a friend at a restaurant down the street from his latest venture, Big Viking Games. On the table in front of him lay his iPhone. He had just drafted an email and was debating whether to press send–it was a message that had the potential to rescue his company from a serious crisis … or to sink it.

Three years earlier, in 2011, Lai teamed up with veteran game developer Greg Thomson to found Big Viking Games (BVG). Their plan was to become a leader in the highly competitive mobile games industry by developing games using HTML5-games that could be played using a mobile browser as well as a game app. At the time, HTML5 was a relatively new programming language and no one was really using it for mobile game development, but Lai believed they could harness it to gain several advantages, especially when it came to distribution.

Instead of having to rely solely on competing in the crowded app stores where most games are distributed, HTML5 would allow BVG to easily distribute its games in other ways, such as through instant messenger platforms, where a game could potentially spread like wildfire. It was the kind of advantage that a small studio like BVG needed to compete with companies that routinely spent millions–sometimes tens of millions–to market a single game.

Using their own capital, Lai and Thomson began hiring a team of developers and pouring millions of dollars into their HTML5 strategy.

Two years later, in 2013, BVG developed Tiny Kingdoms, a role-playing game that Lai believed would be their first HTML5 blockbuster and would easily generate $50,000 a day. But BVG couldn’t quite make the HTML5 technology work the way they wanted, and the experience for the players wasn’t on par with games developed on the standard game app technologies. The distribution explosion Lai had hoped for never happened and revenue was only a fraction of what they expected.

Despite the poor results from Tiny Kingdoms, Lai still believed that the winning move in the mobile games industry would be HTML5, but that it was going to take longer for BVG to find a way to harness the potential of HTML5. Exactly how long, Lai didn’t know, and he worried that if he kept pouring the majority of BVG’s resources into HTML5, he might drive the company into the ground before his strategy paid off. He needed a source of revenue to buy more time.

An opportunity out of left field.

As Lai tried to figure out how to generate more revenue, some big news hit the games industry–Zynga, the largest developer of Facebook games, and the company that famously raised a billion dollars in an IPO in 2011, announced that it was going to discontinue YoVille, a game it had bought in 2008 from Lai’s business partner, Thomson. Many in the games industry saw the YoVille announcement as another in a long list of signs that Facebook games were dying. From 2012 through 2013, Zynga had seen its monthly active users drop from a high of over 300 million to below 200 million, and YoVille, which once boasted 19 million monthly users, now had only had a few hundred thousand.

Soon after the announcement, many die-hard YoVille fans reached out to BVG because of its association with the creation of the game and petitioned it to save the game. Lai felt bad for the fans, and wanted to help them. But that would mean buying the game from Zynga and putting a team together to operate it. It would be a big investment, and given that Zynga was obviously getting rid of the game for its tumbling performance, the move could quite possibly be a disastrous business decision for BVG at a time when it badly needed a revenue generator, not a money pit. But Lai, who had already sold two of his ventures for over seven figures and raised $20 million for another, was experienced at spotting opportunity where others didn’t, and he wondered if the prevailing wisdom that Facebook games were dying was premature. Maybe BVG could grow YoVille–not necessarily to the size it once was, but significantly enough to generate the revenue BVG needed at the time.

This was the question Lai wrestled with as he sat in the restaurant looking down at the email he had drafted-a note to Mark Pincus, co-founder of Zynga, whom Lai had met while involved in a previous venture that did work with Zynga. The note was an offer to buy YoVille. Lai knew that a lot of people would have thought sending that email was a bad business decision, but he also knew that going against the crowd was sometimes the right move. As well, BVG had a Facebook game called FishWorld that it had inherited from Thomson, which, despite expectations that its revenue would decline, had been growing year over year-indicating to Lai that his team had the ability to still breathe life into games on the social network. And so Lai decided to press send.

By the time Lai and his friend finished dinner, Pincus had replied saying he was interested…and the game was on. In April 2014, BVG bought the game from Zynga for an undisclosed amount. A month later, BVG relaunched the game as YoWorld. Lai’s instincts would turn out to be right. Since the purchase, BVG has grown YoWorld’s audience by 40 percent and the revenue it has generated from the game has doubled BVG’s total revenue.

Although Lai’s vision hasn’t been fully realized yet, the YoWorld move has provided the startup with exactly what Lai hoped for–the time and resources to pursue the HTML5 strategy. BVG has now grown the team to 70, developed their third version of an in-house HTML5 game development engine, and prototyped or launched six games. According to Lai, with Apple and Google recently providing more support for HTML5 technology on mobile devices, momentum is building for the type of games BVG has expertise in-a sign that the HTML5 strategy will pay off soon.

When everyone is going right, turn left.

One of the key lessons we took away from BVG’s story is that great opportunities may exist in places where no one is looking–even markets that others are running from. As Lai himself puts it, in reference to the games industry’s rush toward mobile, “When everyone is turning right, sometimes turning left, as we did back into Facebook, is the best move.” Note, however, that Lai didn’t make a wild left turn–he based his decision in part on evidence from his own experience with FishWorld, and knew that success was possible.

Another aspect of BVG’s story, of course, is that when you pursue a disruptive solution, you may need more runway than you originally expected. That’s a lesson we can personally identify with at our company, ClearFit. When we launched in 2007 to disrupt the hiring space for growing businesses, it took longer than expected for customers to catch up in a market that was stuck with traditional hiring practices. Similar to BVG, we needed more time, and in our case had to turn left for a couple of years and incorporate some traditional technology into our offering. This helped us hold the market’s attention until it was ready to adopt our solution. Like BVG, had we not made that left turn, we might not be where we are today.

This post, “Why This Startup Bought a Struggling Product From Its Giant Competitor” appeared first on Inc.