Posted by Jamie Schneiderman on September 27, 2013

About 40–50 percent of all candidates who take our personality assessment end up scoring as a “weak fit.” All’s not lost with these candidates however — here’s why: 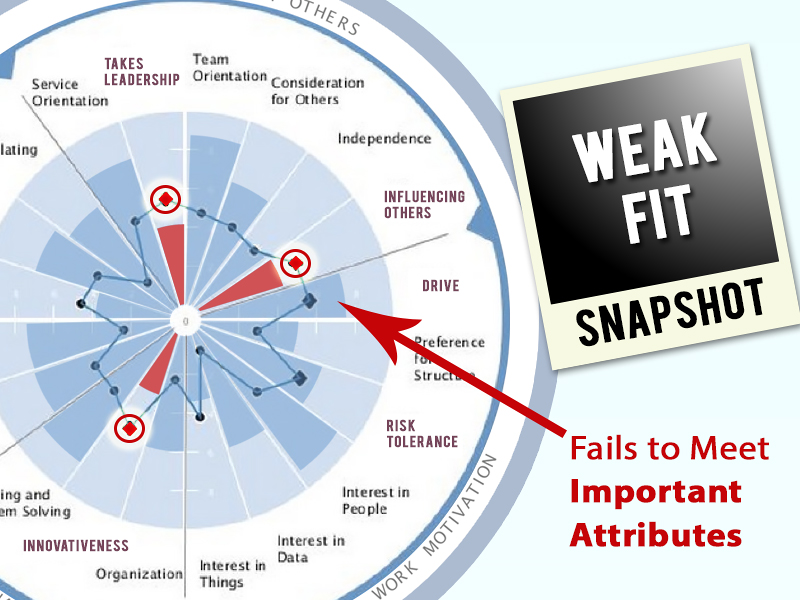 A candidate may be rated as being a “weak fit” for one of two reasons:

It’s important to note, however, that though a candidate may rank as a “weak fit,” this doesn’t always guarantee they won’t be great for the job. In some cases, a candidate may be off/below target just slightly on a handful of important attributes for the position. Hiring managers must also recognize that this profile is not a skills assessment test. A candidate ranking low on a few traits doesn’t necessarily mean that they aren’t good in those areas; it may simply mean that they aren’t naturally inclined to perform such tasks. Therefore, these results from a “weak fit” would then give the interviewer a better idea of what sorts of questions they should be asking and probing the candidate on to get a better feel for how suitable they would be for the job, by seeing what mechanisms the client has developed to deal with and compensate for those areas of their personality in which they scored lower than the target mark.

So don’t ignore weak fits simply because they’re labeled weak fits — look at the whole profile if you aren’t satisfied with the other seemingly better-fitting candidates. Again, the tool prioritizes the list of candidates based on who is the most statistically-likely to succeed at the position. To use a popular sports analogy, just because a guy’s batting .195 in baseball doesn’t mean he won’t get a hit — it just means he’s less-likely to succeed than the guy batting .325. As the “manager,” who would you consider sending up to bat first?

Where to Go from Here?

Have a look at our other articles in the series on fit scores, including “An Overview of What the Test Results Mean,” “Strong Fit,” “Fit,” and “Distortion” to get a full explanation of what each of the results really means and how you can use it to better inform your hiring decision.